Facebook Twitter Messenger Messenger WhatsApp Telegram
At the video shoot of Ras Kuuku’s “Wo” remix just this past Thurday, the Ras got everybody around laughing out louder when video director Soba paired him and Kelvin Boy for a guest scene and Kuuku was ridiculously missing his dance moves. As bad as it was, that was yet the happiest moment of the shoot — getting a louder chorus laughter from entire POUM family around.
Kelvyn Boy, relatively, has a lot of pro precision dancing. He saved Kuuku from further bad steps by showing him how to take his dance well in order not to mess up his (Kelvyn’s) guest scene in the “Wo” video. Kuuku picked up so fast then boom! Soba had his direction satisfactory right then without much re-shoots.
The “Wo” remix features Kofi Kinaata. Kofi was on set to grace the shoot with his God-praise verse which part-tells us about his testimony and appreciation for the wonderful things God has blessed with his career with.
Earlier in the week, Ras Kuuku released “I Love You, a crazy lovey jam piece you can’t miss out on. Check the download link below: 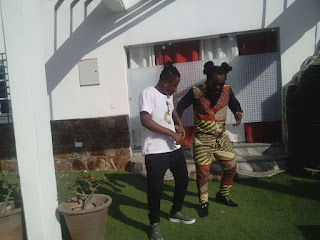