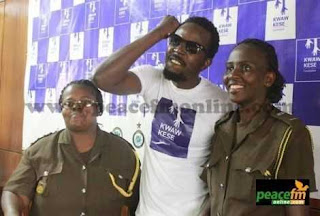 Rapper Kwaw Kese will on Tuesday, February 14 feed about 1,000 inmates of the Pantang Psychiatric Hospital in Adenta in the spirit of the season of love.

Kwaw Kese after he was convicted in November 2014 for smoking marijuana in public launched the Kwaw Kese Foundation with the aim of transforming Ghana prisons.

The Kwaw Kese Foundation, launched on August 19, 2015, presented a 20-year development project for Ghana’s prisons at the Ghana Prisons Service (GPS) head office in Accra, with the hope to raise funds to help as many prisons as possible. Subsidised meals and the general make-up of Ghana’s prisons will be key to its mission.