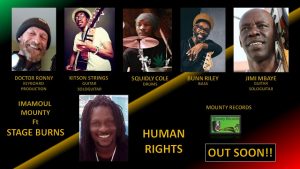 Springing out soon from Belgium to officially join the world music band log with its maiden and pro-humanitarianism album, “Mounty & Stage Burns” has prepared to add to the few revolutionary-cum-entertainment voices that seek to the liberation and welfare of humanity through arts, music and charity.
“Stage Burns” is a multinational band of six excellently talented men. The band’s membership core is made of Mounty Imamoul (Senegal, but based in Belgium), Doctor Ronny (Belgium ), Kitson Strings (Malawi, but lives in Turkey), Bunn Riley (Holland), Squidly Cole (America) and Jimmy Mbaye (Senegal).
Mounty Imamoul is the lead vocalist. Doctor Ronny is the keyboardist but he doubles as a producer. Squidly Cole is the drummer. Bunn Riley is the bassist. Kitson Strings and Jimi Mbaye are guitarists.
Denver Davidson (of South Africa) is not left out. He’s on “Stage Burns” as the band’s official sound engineer. Denver has worked with UB40, Shaggy, Burning Spear and a lot more renowned artistes for years.
Musical background history checks made, it was recorded that Bunn Riley also plays for Kymani Marley, Wayne Wonder, Mr Vegas, Culture, The Mighty Diamonds, Konshens, Brinsley Forde (Aswad), Bitty Mclean and many more. Squidly Cole drums for the Marley Brothers (Damian Marley and Stephen Marley, mostly) and he has also worked with Jimmy Cliff before.
Stage Burns has gotten ready for release its maiden album dubbed “Human Rights. The album is an 18-track project that spans multiple themes. It talks of politics, religion, world unity, racial equality, love and other everyday life aspects relatable by all and sundry.
Originally, the album was of 20 tracks, but two tracks have been reserved out for future a release as singles or to be included on a future EP or LP.
“Human Rights” is slated for an early-July release, Mounty revealed. Perhaps in the month’s first week.
.. .
PUBLISHED on 11th June, 2020.