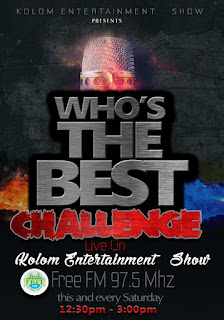 Renowned Bono East based radio presenter Nana Baffour the entertainment host of “Kolom Show” on free FM (97.5MHZ), a radio station situated in the Bono East Region set to commence a new segment on his Saturday Entertainment program, a show that spans from 12:30 – 3:00pm.
This segment themed “WHO IS THE BEST CHALLENGE” will be between two artistes each week whereby it will not be beef or diss related, each artistes are to submit 10 of his best songs that will be played on-air, after that callers or fans will be allowed to call in and vote among the two artistes whose song is the best and has good lyrics and content.
This is to help solidify the artiste’s fan base and project their works across the country which will also help us to seed out the strong root of our entertainment industry thus putting into documentation the full profile of our artistes’ in the capital.
The first episode comes off this Saturday on the Kolom Entertainment Show which will be between Kwadwo Friktion and Megabush, the two will be judged according to their own works by their fans which will also help to see how loyal each artiste’s fans is to them.
The one who would be crowned or chosen as the winner will again have to meet with another artiste until finally, we get to choose the overall best. According to Mr. Baffour as a visionary, he has decided to make it a 70 percent of the local entertainment content and 30 percent content of the mainstream news on his program with this, it will him acquire more of our local music artistes’ songs so he can play them on his daily routine.
Make sure to make a date with Nana Baffour on the Kolom Entertainment Show this Saturday 11th on Free Fm (97.5) MHz. your number one radio in music and entertainment.